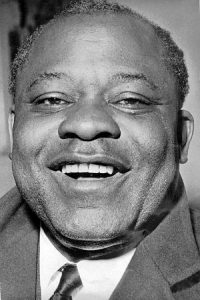 Saint-Firmin (S. F.) Monestime (December 16, 1909 – October 27, 1977) was a Haitian–Canadian politician and medical doctor, who was the first Black Canadian elected mayor of a Canadian municipality.[1]

Born in Cap-Haïtien in 1909,[2] Monestime studied rural medicine and wrote three books on the subject.[3] In 1937, he was one of the only doctors on duty during the Parsley Massacre, and was subsequently awarded the Haitian Legion of Merit for his work during that crisis.[2]

He moved to Quebec City in the 1940s. After upgrading his medical training he planned a move to Timmins, Ontario to set up a medical practice, but when he stopped in Mattawa en route, he was convinced by a restaurant owner to stay in that town and set up practice there instead.[4] He married Zena Petschersky, an immigrant from Danzig,[5] whom he met in Ottawa in 1953.

Monestime practiced medicine in Mattawa until 1964, when he was elected the town’s mayor. Except for one year that he took off for personal reasons, he remained mayor until his death in 1977.[4]

Monestime was active with the Progressive Conservative Party of Canada, and served as its national director. He considered running federally for the party, and in 1971 he ran and lost in a bid for the presidency of the party.[6] A Red Tory, Monestime was attracted to the party because of Prime Minister John Diefenbaker‘s Bill of Rights.[7]